Princess Yasodhara belonged to the Royal clan of Koliyas, (same clan of Queen Maha Maya). Her father was King Suppabuddha and her mother was Queen Pamitha. She was one of Prince Siddhattha's cousins. She was more commonly known as Baddhakaccana and later as Rahula Matha. Probably because this was how she was called within the royal court of the Shakyans. This maybe because King Suddhodana's Auntie was also named Yasodhara. She was also called Bimbadevi.
The meaning of the name Yasodhara is “glorious bearing” (In Sanskrit “yasas " means glory or splendour"  plus  “dhara " means bearing  =  Bearer of glory ). In ancient scriptures besides being named Yashodhara, she had been called  Yasodhara, Bimbadevi, Bhaddakaccana and Rahulamata (mother of Rahula ).
At sixteen years of age she got married to Prince Siddhattha and later gave birth to their only son Prince Rahula. When Prince Siddhattha visited Kapilavatthu as the Buddha, following  his enlightenment,  she did not go to pay homage to Him even though everybody else in the whole of the royal household did. She alone sat in her chamber, thinking thus, “I have been faithful to my lord throughout and surely if there is any virtue in me, the Lord Himself, the Buddha will come to me." The Buddha knowing this went to her chambers accompanied by his two chief disciples. On seeing Him, Yasodhara quickly came forward and clasping his ankles placed her head on His feet and paid reverence to Him as she wished. The Buddha let her pay homage as she wished and advised the others also, not to disturb her. Yashodhara gave up the household life and entered the order of nuns at the same time as Maha Pajapati Gotami and soon became fully enlightened, after which she was referred to as an Arhant Mehenie Baddhacaccānā.
. 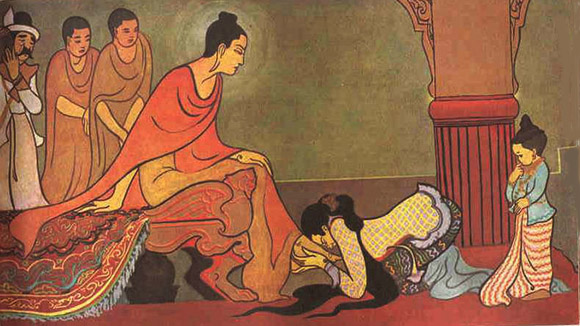 In the Pali Canon she is referred to as Baddhakaccana (refer to endnote i) and not as Yasodhara. These references are made to the Arhant Theruni, after she entered the order and became fully enlightened as an Arhant (refer to endnote ii). As an Arhant Bhukkuni, she possessed supernormal powers and lived in a nuns’ monastery  helping other women how to end suffering and get enlightened.  With her Arahantship she was declared the chief disciple among the nuns who attained supernormal powers  and Maha Abhiññā
(Abhiññà), ability to recall infinite eras of the past. Only four of the Buddha’s disciples had such powers. Arhant Theruni Baddhackaccana, (Yashodhara)  passed away at the age of 78, prior to the Lord Buddha.

When she went to take leave from the Buddha, before she passed away accompanied by 500 of her  disciples (nuns), the Buddha invited her to show the world her skills.  This was necessary as she was a very quiet person, in keeping with her virtues and noble qualities (she never showed off), that many people specially males, looked down upon her and all other women in general, and belittled them, thinking that they lacked in wisdom  and skills etc.  The Buddha felt that this should not happen as it would be harmful, even for those who thought this way, ...  seeing that it would be a defilement in their minds due to their ignorance, because she was a Noble Arhant who deserved to be venerated.   At this request of the Buddha, even though she was an aged person of 78 years she performed various psychic skills which transformed her body-form, (involving transcendence from  hard cells in the body, (patthavi) to water (liquid cells in the body), wind, to gaseous cells in the body (waayo – wind element in the body) to energy element in the body (thejo) which required enormous powers in the mind and the ability and skill to bear any kind of pain to the body, and thus proved her prowess which hitherto was unknown  publicly.

ii        Arhant, Arahath, is the first saint in Buddhism.  The highest sainthood achieved through fully enlightenment. The Second being Anagamai – Non returner, lower to that of Arhath,  the third – Sakadagami – once returner, and the fourth Sothapanna.  An Arhath is free from all defilements and complete in purity and is considered the highest of saints. An Arahant has completely ridden off the so called "self conceite"of "me, mine, myself and I".